Hey, everybody!  I'm very excited about today's guest, one of the most exciting new names in horror fiction.  Let's meet her briefly and then jump right in! 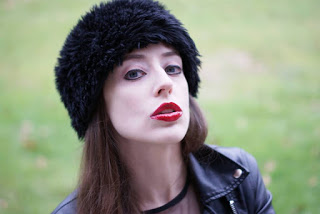 Gwendolyn Kiste is the Bram Stoker Award-winning author of THE RUST MAIDENS, from Trepidatio Publishing; AND HER SMILE WILL UNTETHER THE UNIVERSE, from JournalStone; and the dark fantasy novella, PRETTY MARYS ALL IN A ROW, from Broken Eye Books. Her short fiction has appeared in "Nightmare Magazine," "Black Static," "Daily Science Fiction," "Shimmer," "Interzone," and "LampLight," among others. Originally from Ohio, she now resides on an abandoned horse farm outside of Pittsburgh with her husband, two cats, and not nearly enough ghosts. Find her online at gwendolynkiste.com.


SK:  How are you involved in the world of horror?

GK: I’m a horror author of both fiction and nonfiction. My debut novel, THE RUST MAIDENS, came out in 2018 from Trepidatio Publishing and won both a Bram Stoker Award and the This is Horror Award. I also have a fiction collection, AND HER SMILE WILL UNTETHER THE UNIVERSE, from JournalStone, and a dark fantasy novella, PRETTY MARYS ALL IN A ROW, from Broken Eye Books. On top of all my fiction, I’ve written a number of articles and essays for numerous outlets including "Vastarien" and "Unnerving Magazine." 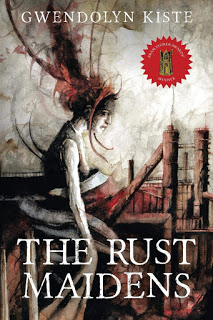 GK: People in general terrify me. The casual cruelty of humanity is more horrifying than any supernatural force. The only thing that keeps me going is that there’s a great capacity for kindness in human beings as well; without that, the world would be far more unlivable than it currently is.

Loss is also very scary to me, in particular the loss of a loved one. That’s been a kind of terror that’s always been creeping at the margins of my life since I was a child. Life really is so fleeting, and everything you love can be gone in an instant, which is such a horrifying and unsettling reality when you think about it at all. Again, though, being able to appreciate the good moments when you’re living them makes the horror of the world a little more bearable. That’s one of the many ways that horror appeals to me—it doesn’t shy away from any of life’s somewhat routine terrors. Instead, the horror genre faces all those things without flinching, which can sometimes even take away some of its power.


SK:  Are there unique challenges to being a woman in horror or do you feel like gender is irrelevant?

GK: There are definitely still a lot of challenges being a woman in horror. Women still aren’t taken as seriously as male writers. Our fiction often isn’t published as widely or considered “important” enough work. Female-centric stories are also sometimes not deemed “scary” enough or even belonging in the genre in the first place. Fortunately, some of these preconceived notions are changing, which is so heartening to see. I do hope that the day will eventually come when Women in Horror Month won’t be needed anymore, but until we get to that point, I’m glad there’s at least one month a year when there is a lot of signal boosting of women writers. It definitely helps draw more attention to the work of female horror creators, and it’s also a really nice time to celebrate the horror genre in general.

GK: Shirley Jackson and Angela Carter are two of the biggest ones for me. Their fiction is so unusual and uncompromising, and their stories have held up incredibly well over the decades. In particular, Jackson’s novel WE HAVE ALWAYS LIVED IN THE CASTLE and Carter’s collection THE BLOODY CHAMBER are must-reads for horror fans. As for more modern horror creators, Jennifer Kent is doing amazing work; "The Babadook" is one of my favorite new horror films of the last ten years. And finally, when it comes to horror authors who are writing today, I would say Christa Carmen, Sara Tantlinger, Eden Royce, Stephanie M. Wytovich, Christina Sng, Brooke Warra, and Lori Titus are all doing such exemplary work, and I would recommend their fiction to any horror fans.

GK: My novelette, THE INVENTION OF GHOSTS, is available now from Nightscape Press. It’s all about the occult, phantoms, and complicated friendships, so if you like ghost stories, in particular weird ones, then it might be right up your alley! The book is part of Nightscape’s Charitable Chapbook series, and one-third of all proceeds go to the National Aviary in Pittsburgh, so it’s horror for a good cause!

As for what I’m currently working on, I’m in the process of finishing up some short stories as well as some nonfiction articles. Also, I’ll hopefully have a second novel out at some point in the next year. For anyone who wants to keep up with me and my blog (which also features interviews and a monthly roundup of open submission calls), feel free to track me down at gwendolynkiste.com.

About THE INVENTION OF GHOSTS: 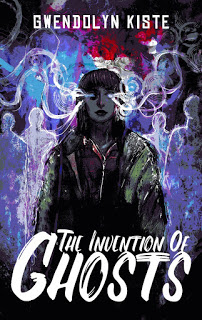 One third of all sales of this chapbook will go to support the National Aviary. The National Aviary is America’s only independent indoor nonprofit zoo dedicated exclusively to birds. Located in Allegheny Commons Park on Pittsburgh’s historic North Side, the National Aviary’s diverse collection comprises more than 500 birds representing more than 150 species from around the world, many of them threatened or endangered in the wild.

It starts with rapping in the ceiling and spirit boards that know them a little too well.

Everly and her best friend aren’t your typical college students. Instead of raucous Saturday night parties, they spend their weekends conjuring up things from the beyond. Ectoplasm, levitation, death photography—you name it, and Everly knows all about it. But while this obsession with the supernatural is only supposed to be in good fun, the girls soon discover themselves drifting deeper into magic and further from each other. Then when one evening ends with an inadvertently broken promise, everything they’ve ever known is shattered in an instant, sending them spiraling into a surreal haunting. Now Everly must learn how to control the spectral forces she’s unleashed if she wants any chance of escaping a ghost more dangerous than all the witchcraft she can summon.

A tale of the occult, unlikely phantoms, and complicated friendships, THE INVENTION OF GHOSTS is the latest strange vision from the Bram Stoker Award-winning author of THE RUST MAIDENS.
Posted by Stephen Kozeniewski at 12:00 PM