BILLY AND THE CLONEASAURUS Audiobook Trailer

I know, I know, the blog's been pretty much wall-to-wall videos lately.  So why not one more?  Check out the trailer for the upcoming BILLY AND THE CLONEASAURUS audiobook, narrated by the inimitable Steve Rimpici!

Hey everybody!  In case you haven't been obsessively clicking my 2016 Schedule for updates (and, seriously, what kind of fan are you if you haven't?) it turns out I have one last appearance in me for 2016, verging into my very first appearance of 2017.  That's right, I'm going to be attending New Year's Partycon from December 30 to January 1!

The con's going to be held at the Holiday Inn Lehigh Valley on I-78 near Allentown, Pennsylvania.  The address is:

I'm going to have a table in Artist's Alley all weekend.  All five of my novels will be available in paperback.  My frequent convention partner and science fiction author Mary Fan will be there, but Saturday only, so plan around that if you want to meet Mary.  Autographs are free, and we'll have our own books available for sale for $12 apiece for a single purchase or $10 apiece for more than one.  We accept cash or credit.  I've also promised to do a little dance for anyone who asks, free of charge.

And as if you needed any reason to come other than me, titan of the industry and my personal hero Brian Keene will also be at the convention, signing autographs and selling books.  (No word yet on whether he will be performing little dances.)  You can also meet horror author Mary San Giovanni (the progenitor of the Slender Man myth), Marvel Comics artist Steve Geiger, author Michael DiBaggio, and many, many more.

Email ThisBlogThis!Share to TwitterShare to FacebookShare to Pinterest
Labels: Every Kingdom Divided

Holiday Gift-Giving Guides #5 and #6: BILLY AND THE CLONEASAURUS and FAT ZOMBIE

Email ThisBlogThis!Share to TwitterShare to FacebookShare to Pinterest
Labels: Billy and the Cloneasaurus, Fat Zombie

Holiday Gift-Giving Guides #1 and #2: BRAINEATER JONES and AT HELL'S GATES

Hey, everybody!  Last year I made a couple of totally self-serving last-minute gift-giving guides for the holidays season.  Still, if you're stuck on what to buy for somebody, they could actually help.  I have (at least) two more to make this year, but first I'm going to run through the six I've already made, and since it's already December 12 (!) we're going to double them up for the next week.  Enjoy!

HUNTER OF THE DEAD Video Review

I don't usually toot my own horn about reviews here on the blog.  I just keep a running tab here.  Every once in a while, though, a review is so mind-boggling or flattering that I just have to share.  And earlier this week I was absolutely floored when I clicked on a seventeen minute YouTube video which I assumed was one of those porno come-ons where they just happen to include your book cover at the beginning so people will click on it.  Instead, though, it turned out to be a thorough exegesis by reviewer and Teslan super-fan Erik Smith!

So if you liked HUNTER OF THE DEAD even a little book, I'm thinking you'll be tickled pink by Erik's review.  Check it out!  Click like!  Subscribe!  All that good stuff we should do for people we support.

Sorry I've been out of pocket for almost the last two weeks.  I'm not really sure what happened.  I guess I used to compose blogposts at work and things have been getting hectic.

So it probably seems a little late now, but here's a little check-in on my NaNoWriMo this year.  I did, indeed, win, as I have every year since I started in 2009.  For those of you interested in my statistics, here they are: 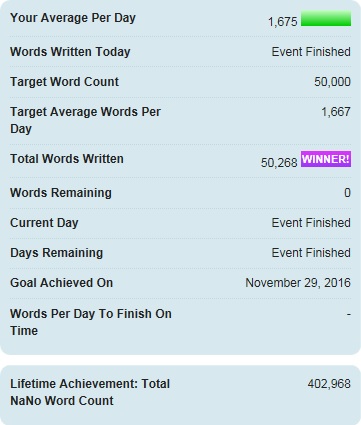 And in graphic form: 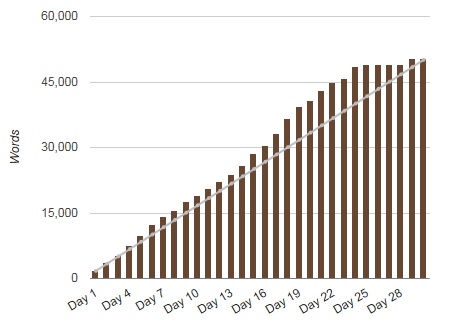 Now for a brief analysis as I do every year as well.  As you can see, I started the month just barely squeaking by.  I normally like to get a solid buffer in the first few days, ideally after midnight Halloween night when possible.  That didn't happen this year.  Around November 5 I did finally begin logging a little extra each day.  The biggest spike came on November 18, the first Friday for some reason that I really managed to sit down and pound out a couple of writing sessions.  I had intended to do that every day of every weekend before that, but as you can see I couldn't get it to really click until the 18th.  I stayed way over expectation up until I hit 48,500 words on the 24th.  That was the weekend I was at Chessiecon in Baltimore, and then went home to Philadelphia the Monday and Tuesday after.  So Friday the 25th I did just a few hundred words before heading to the con, then it's a flat line for the con, where I wrote nothing.  I pounded out a few hundred words when I got home Tuesday, then finished the project Tuesday evening, with one day to spare.  So, not exactly a banner NaNo, but a win's a win.

Since NaNo loosened up their strictures and allowed that 50,000 words of writing counts as a win even if it's on multiple projects, I've been enjoying the process a little more.  Do you ever get sick of working on that one project and start another?  There used to be no room for that in NaNo.  Now that there is, it's a bit freeing.

So this year I was working on SLASHVIVOR! which is a contracted manuscript I owe to Sinister Grin Press in February.  I somehow suckered our good friend Stevie Kopas into collaborating with me.  But I knew that since we were batting it back and forth, there was no way I was going to get 50,000 words done on it in a month.  I did get a solid 15-20,000 done on it, and we are so close to the finish line I can taste it.

My backup manuscript this year was the sequel to THE GHOUL ARCHIPELAGO, tentatively titled NOTES FROM THE UNDEAD.  I've now worked on NFtU for three solid NaNos: 2012, 2014, and 2016.  I've already winnowed out two short stories from this, "The Man With Four Scars" which appeared in AT HELL'S GATES II, and "The New Dark Ages" which appeared in FAT ZOMBIE.  I also did something this year I've never done before: edited out large chunks of the text as I went.  More than once I wrote a solid thousand words, chucked it into my tally document, and started over.  You're not supposed to edit during NaNo, but, surprisingly, I found that having that word count as a goal meant that major editing, as in, cutting out a huge chunk and starting over as I described, was actually beneficial.

Since I've worked on NFtU for three solid NaNos, you'd think it would be a monster of a document, and even bearing in mind how much I've sliced out, it still is.  And it's still not quite complete yet.  I'm thinking it'll take at least another thousand words to finish up one chapter I left hanging.  And then there's the question of whether there's enough ligament holding the story together, or whether I'll have to flesh (ha!) some of that out as well.

I have a lot of work ahead of me.  First my author edit, which I should put off for at least a month or six weeks, assuming I even do it then, then I'll probably pass it to my good friend Mike Lerman, who beta read TGA and who I've always intended to tap for this project as well, belated though it may be.

I don't know if the story is going to be published at its current length (over 125,000 words even before the beefing up I just described.)  TGA was a solid 119,000 words, which is on the longish end of novels.  I'd like to cut at least ten thousand words out of NFtU, but I'm not sure there's enough fat to trim that much out organically in the editing process.  It may just turn out to be a doorstop of a book.  Time shall tell.

How about you?  How did your NaNo go this year?
Posted by Stephen Kozeniewski at 3:24 PM No comments: