If you've been following the blog for some time, you know that I'm a big proponent of Script Frenzy, the bastard stepchild of the far more famous National Novel Writing Month.  The Frenzy starts tomorrow and, truth be told, I'm a bigger fan of this one than NaNo.

Script writing, on the other hand, is just for kicks.  For one thing, there's no pressure.  Unless you already do it professionally, there's almost zero chance of a spec script getting picked up.  Not to mention that you just do whatever and leave all the details to your collaborators.

Don't like ascribing emotions to your characters?  Don't worry, the actors will do that.

Don't like setting the scene?  Don't worry, the set designers will do that.

Don't like describing every little detail of the big fight or dance?  Ha!  That's what choreographers are for.

So, yeah, I'm a big fan of the Frenzy.  It's just you and the plot, in the most basic, nuts and bolts way possible.  Not to mention that, as I've described in great detail before, 100 pages of script is a very modest goal compared to 50,000 words of novel.

My page, as every year, is here.  This year, I'm in a bit of a bind.  I haven't really thought that much about Script Frenzy.  I always have as a fallback the idea of writing a couple of episodes of Kingdom, my much neglected spec TV series.  I've also considered writing Maverick, LCSW, the story of a social worker with nothing to lose travelling through the American Southwest and plying his trade.  I guess I could always do The Party, which I've always been meaning to do, about a group of kids who take off on a real-life D&D adventure.  Or, since it's been so successful in the past, I could put it to you, the Manuscripts Burns "community" to give me a suggestion.  If I like your suggestion by midnight tonight, I may just do it.
Posted by Stephen Kozeniewski at 3:20 PM No comments:

The first thing that goes through a quarterback's head when he hears there's low morale goin' around is: "What'd I do?  Is it all my fault?"  Well, he's probably right.  Most of us have been together a long time.  There are others that were here before that.  Do you all not like me anymore?  I mean, what am I supposed to do?  I don't know.  Look, if you're not against me don't cross this line.  If yes, do.  I love you all.
Posted by Stephen Kozeniewski at 4:03 PM No comments:

Mop O' the Morning to ya! 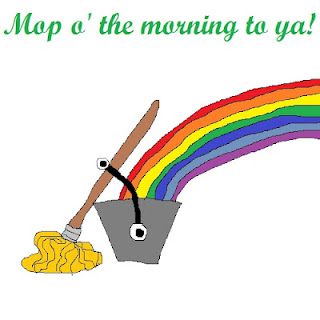 Posted by Stephen Kozeniewski at 1:15 AM No comments:

The San Man Cometh: A Play In One Act

Campaign Manager:   What, the Google problem? There's...nothing we can really do about that. We have freedom of speech in this country.

CM:   Okay, okay! Jesus Christ, Rick! Um...we could...shut down the whole internet, I guess? Of course, that would cost millions of jobs...

CM:   Um...or...also...and I'm just brainstorming here...we could ban all pornography? I guess that would cost...fewer...jobs. Still hundreds of thousands, though.


FIN
Posted by Stephen Kozeniewski at 9:43 PM No comments: