The Lamest Number of All Time

Pff.  Twenty-eight.  What a lameass number.  I won't even dignify it by expressing it numerically.  Thank God I waited to write this post until February 29th (a far superior day to the previous, I will have you know, a magical day, in fact, that only occurs once every four years.)

In addition to being the LEAST number of days in a month, twenty-eight is a game played in the COMMUNIST Indian province of Kerala.  Communism itself being inherently lame, it's clear that any game played in a communist area would be lame.  And speaking of red things, well, let's just say that there's a certain red thing that every lady gets, you want to guess how often?  Every twenty-eight days!  How's that for vile conincidence?

Not to mention that twenty-eight is the number used by Quebecois witches in their fanciful Canadian witch rituals (or "witchuals" as I sometimes call them.)  Or what about the neo-Nazi association with twenty-eight?  That's right.  2 (B) + 8(H) = Blood and Honor in simple alphabet code.  It's not even a good code!  Stupid Nazis and their stupid Nazi numbers.

I say it's time we banned usage of the damnable number twenty-eight.  It's only 5 more than the worst movie ever made.  Not to mention that the cruel and wicked game of dominoes (have you ever heard somebody say "they stood like a set of dominoes?") contains...you guessed it...TWENTY-EIGHT dominoes.

It is with all this in mind that Congressman Bartlett and I are co-sponsoring a bill to ban this accursed number from common discourse in these United States of ours.  I hope we can all count on your support.  Sic semper viginti octo!
Posted by Stephen Kozeniewski at 10:08 PM No comments:

Why I Hate Bangs

This is Moe Howard: 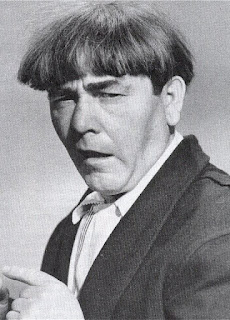 Moe is a seminal pioneer of comedy, still a household name some eighty years after the height of his popularity for multiple reasons.  For one thing, the Three Stooges are still humorous today, albeit a bit dated, and that's something we don't often say about comedy that's even ten, fifteen, twenty years old.  For another thing, while their humor is seemingly mindless, in fact the Stooges were extremely witty satirists, often shining a light on poverty during the Depression when such things weren't really done.  Moe himself, in fact, was the first person to impersonate Hitler on film, which was certainly something of a taboo at the time.

Finally, Moe is still famous today for his haircut.  This haircut was, and, I can't stress this enough, worn for comedic purposes.  Because Moe was a comedic genius, he understood the value of a good physical gag, and combed all of his hair forward and cut it like a bowl.  Hilarious.  And yet we here, some eighty years later, have somehow forgotten that this was meant to be a joke.

So, let me be clear: women who wear this haircut look as ridiculous as Moe.  And I'm not just talking about your average woman on the street, as in, "Oh, she would look a bit better if she cut her bangs."  No.  I'm talking about supermodel gorgeous stars, who, perhaps being lied to by their stylists as they chuckle behind their backs, opt to look like this.  Let's take an example.  Here's Kim Kardashian: 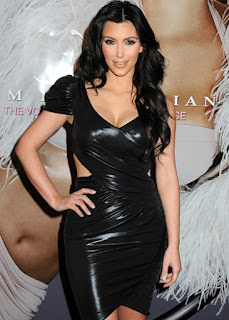 Love her or hate her, find her vapid or find her not-quite-so-vapid, it's hard to deny that this is an attractive woman.  In fact, even her most rabid opponents are fond of saying, "She's only famous because she's pretty!"  Now, here's Kim Kardashian after someone accidentally took a weed-whacker to her hair: 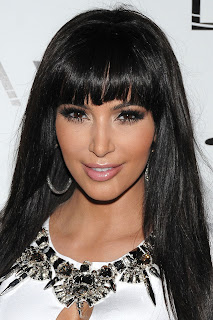 Congratulations, bangs.  You just made Kim Kardashian ugly, and physical beauty was pretty much her only asset.  Let's take another example of a less famous person.  Some of you may watch G4.  Here is a picture of the host of X-Play, Morgan Webb, prior to 2009: 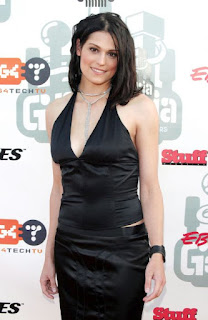 Here's Morgan after 2009, when she inexplicable decided that she wanted to look like one of The Three Stooges: 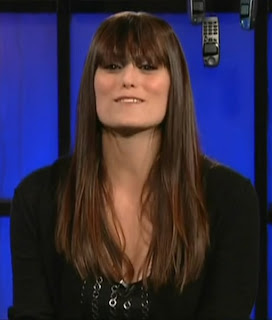 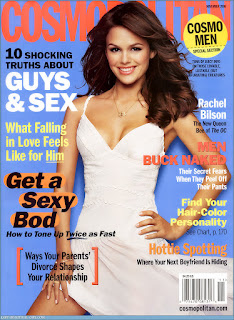 You'll notice that someone at some point said, "Say, that girl is pretty enough to be on the cover of Cosmopolitan, a magazine devoted solely to sex!"  Now, here's that same person after placing a helmet on her head and saying, "Just cut around it:" 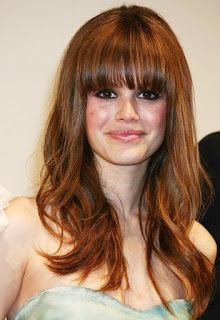 So, by this point, some of you might be saying, "Ah, you're just taking the best pictures without bangs, and then comparing them to the worst pictures with bangs.  I'm on to your game, you bastard."  Well, I could have done without the "bastard," but, fine, I'll play your game, you rogue.  Let's take Lea Michele, star of increasingly outlandish and nonsensical television show "Glee," as an example.  Here's a "candid" picture of Lea Michele on the red carpet, where the picture you take is the picture you get, and airbrushing isn't even an option: 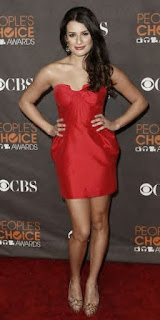 In THIS picture she looks good.  Now here's a publicity still from the second season of "Glee."  They had professional photographers, they had all the time in the world, they had wardrobe, makeup, all kinds of cosmeticians on hand, and even if all that didn't work, they could still touch up the photo later if they felt like.  The only difference is that in this one, somebody felt that the best thing to do would be comb all the hair over her face and then cut it, possibly with masking tape and children's scissors: 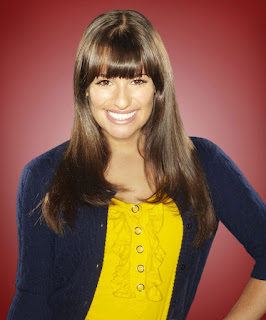 This is why I hate bangs.  This, right here.  Perfectly attractive human beings who I would otherwise have no cause to kick out of my bed, are made into wailing lunatics who look like they should be slapping a fat bald man.  It's boner poison.  BONER POISON!  Now, if you're still not convinced, if you've made it this far into this post and you're one of those people who say, "Oh, I don't know, I don't mind bangs so much" then I have one last piece of evidence for you. 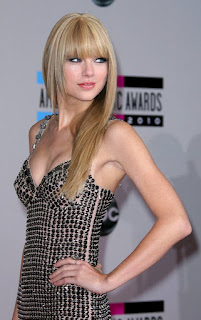 This is for the good of the writing community, so I'll describe this here on my "writing" blog rather than on Twitter or Facebook or eBay. Let me know if you've had a similar experience.

Right now I'm carefully analyzing the word choice on a very positive but non-committal e-mail from an agent.  If I'm being honest and objective, I suspect this entire message boils down to, "we like your manuscript enough not to reject it outright, so we're still mulling it over...more to follow."

However, if I'm being myself, as I sometimes, sadly, can't help being, I can't help but wonder if "more attention" means "we're calculating overseas figures."  And, for that matter, whether "sincerely" means "I'll suck your cock for a thousand dollars."  And so on.

At this point, I'm considering going back to review one of the agent's recent TV appearance, and go frame by frame, glancing deeply into his eyes to see whether he is thinking about my manuscript or not.  I'm sure there's something in there that can tell me...
Posted by Stephen Kozeniewski at 12:30 PM No comments:

It's not often that my liberal arts degree comes in handy.  Certainly never in my professional or personal lives.  But every once in a while, someone wants to know what "Du Hast" was about, or maybe what Schwarzenegger's last name means.  (Hint: it's extremely racist.)

And today is, indeed, one of those rare days.  Living, as I do, in neither New Orleans nor Brazil, today's non-annual religious celebration is generally known as...

Faschtnaut Day?  Fasnaught Day?  Flim-floogle Day?  I've seen all kinds of spellings of it today (god bless you, Fassebook.)  What's a little odd to me, is that this is one of those times where the standard German (a.k.a. Hochdeutsch) term is super-easy and people seem to be making it harder than it really is.

So, as a public service announcement on behalf of all Germanists, here is a very brief and simple language lesson on this day of days.

So, literally "the night of fasting."  As in, the night before Ash Wednesday.

That's it.  "Fast" which is the same in English, just pronounced differently*, and "nacht" which is not really that hard.  Just pretend the "ch" is a "k," or, if you're really into the whole verity thing, just pronounce it as a hard "h."  Just keep pressing the "h" out of your mouth.  Pronounce each "a" as if it were the "o" in "bog."

By the way, there are dozens of regional variations, so it's likely that almost any way that you spell it is going to be right SOMEWHERE.  (Except "flim-floogle."  I just made that up.)  But, frankly, I think the standard German is one of the easiest, and also, you can impress your friends with your newfound knowledge of why, exactly, we call these doughnuts "Fastnachts."  Oh, actually, I forgot to mention that part.

It's because in Pennsylvania German communities, Lent was traditionally a time when they gave up oil, lard, sugar, all kinds of things, really, so on Shrove Tuesday they gathered all that crap together and made doughnuts out of it to get rid of it on the night before the fast.  Boom.

*that's called a "cognate," by the way.  Hooray, linguistics!
Posted by Stephen Kozeniewski at 4:02 PM No comments:

It's been suggested by some that Common's portrayal of recently emancipated slave and current walking boss for the railroad cut crew Elam "They Call Me Mr. Ferguson" Ferguson on AMC's "Hell on Wheels" may be somewhat historically inaccurate.  That, perhaps, freedmen of the period did not wear their hair bald and their beards unkempt.  The reviewer for The Onion's A.V. Club even goes so far as to refer to the character as "Common," despite house style dictating that he should use the character's name.

Well, I, for one, call fie on these naysayers.  The truth of the matter is that many contemporary records indicate that the style portrayed by Common was very, well, common amongst freedmen of the time.  For evidence, let me present the following daguerreotypes, recently unearthed from Matthew Brady's personal archive: 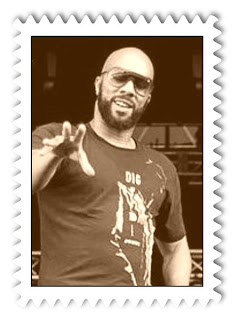 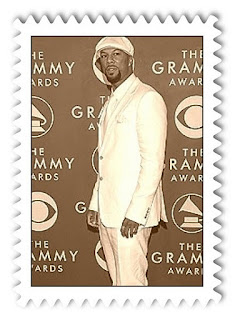 Posted by Stephen Kozeniewski at 10:16 PM No comments: