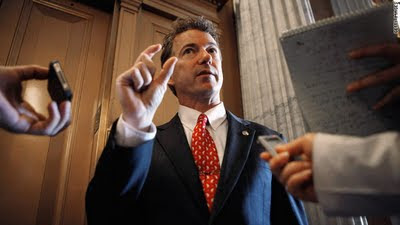 Sen. Rand Paul (R-Ky.) indicates the size of his penis.
Posted by Stephen Kozeniewski at 2:33 PM No comments:

Top Ten Things to do Instead of Watching the Royal Wedding

Here at Manuscripts Burn we like to give public service announcements every once in a while.  Today we bring you another one.  DJ Flav has wisely counseled me not to even acknowledge meaningless bullshit like this lest I give it power.  However, considering the fact that 1/3 of the world's population will be watching this wedding, I think I can confidently say that there's no way that my silence on the matter will actually affect anyone's knowledge of its occurence.  But hey, just in case it did, the Windsor family now owes me royalties (ha!) for advertising an event which you otherwise wouldn't have known about!

So, without any further ado, here is a list of the top ten things you can do tomorrow instead of watching wealthy foreigners perpetuate a defunct and largely meaningless institution (by which I mean marriage, not the monarchy):

10.  Go to work, since that's what you're probably NOT doing if you took the day off to watch the wedding.  The economy needs you, a-hole.  Way to be doubly unpatriotic.

9.  Watch the Human Centipede.  If you want to see someone shit in the mouths of the poor and disenfranchised while gleefully delighting in their wealth and life of leisure, you may as well just literally watch that occur.

8.  Dig up the graves of Franklin, Jefferson, Washington, and all the other founding fathers, and all the members of the Continental Army who died in the Revolution, and then ever-so-gently skull-fuck their corpses.  They didn't go to war and dump a bunch of tea in the ocean so that you could watch a bunch of Tories flaunt their stolen tax dollars, god damn it!

7.  Sit your daughters down and make them watch The Princess Diaries, The Princess Protection Program, and Beauty and the Beast.  Heck, pretty much every Disney movie ever made.  Hey, you've got to instill in them that an astronomically unlikely accident of birth or happenstance will happen specifically to them somehow, right?

6.  Time for a history lesson!  I recommend "A Concise History of the Russian Revolution" by Richard Pipes.  Now that's what they used to do to royals.  And with a little luck...

5.  Go to the airport.  Purchase a ticket on Southwest Airlines (World's Worst Airline™) to anywhere in the world.  Treat yourself.  Splurge.  Buy first class.  Sit down in the big comfy chair, hell, order a margarita.  Chat up the person sitting next to you, hey, flirt a little bit if it's the opposite sex (or the same sex, whatever floats your boat.)  Wait until the plane is pretty well aloft, about an hour into the journey.  Ask the stewardess if you've really reached max altitude after the pilot announces it.  When she confirms that you are, nod and ask permission to go to the restroom.  After she tells you that you don't need her permission, go to the exit door, pry it open, and throw yourself out.  As you plummet towards the great brown ground or the luminous blue ocean, scream, "Fuck the world!  You don't know me!" over and over and over again.  Then SPLAT!

4.  Play Portal 2.  There's not really a joke there.  It just looks like an awesome fucking game.

3.  Curl up into a fetal ball and gently rub your own temples, reminding yourself over and over again that the British also produced The Rolling Stones and Doctor Who, and sometimes you've just got to take the good along with the terrible.

1.  Anything.  Literally anything in the world would be better than watching this.
Posted by Stephen Kozeniewski at 11:33 AM No comments:

Well, well, well.  Looky looky.  It seems your beloved blogsman has won himself a contest.  It seems that friend of the blog and proprietor of Lesser Apricots Perri will be reviewing the first 101 pages of the much vaunted Ghoul Archipelago.  Funny winning that, too, considering I've been more or less taking April off in order to rule the universe of Script Frenzy.  Those of you who follow the blog religiously (and, really, if you don't, what's your problem, dude?) may recall that I won an ARC for Day One once.

Neither of those were skill-based.  It seems as though my only skill at winning contests is random good fortune.  Well, I guess there are worse skills to have.  Anyway, April is going to continue to be slim postings due to the ongoing nature of Script Frenzy.  However, I did finally conduct an interactive storytelling experience last weekend which was taking up a massive amount of my time, so I may have time to come back to the blog now and then.  But, anyway, congratulations to all the winners of Perri's contest, but to me especially, because I was the number one winner and I'm awesome.
Posted by Stephen Kozeniewski at 11:28 PM No comments:

You know, I normally follow the orders of the benevolent leaders of the People's Republic in lockstep, but any decision that could potentially prevent 1/6th of the world's population from viewing history's greatest show is one to be frowned upon.  Where is the international community now?  You all came out to protest some convicted felon not getting his Nobel peace prize  and some dumbass trying to stare down a tank, but now that something truly important is at stake, you are silent?  For shame.
Posted by Stephen Kozeniewski at 3:23 PM No comments:

In other news, Yahoo gets really judgmental about the WNBA 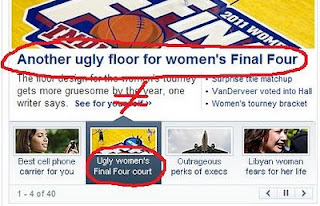 Posted by Stephen Kozeniewski at 10:10 AM No comments: