What the Fuck is the Buddy System?

Countless great movies have been made about one man's quixotic struggle against a vast, dark conspiracy.  And some not so great movies, too.  (I'm looking at you, Sandra Bullock vehicle "The Net.")

What's compelling about the idea of a dark cabal in charge of things is that it both suggests that the vague unease we all feel about living in a complex, sometimes amoral society is legitimate, without really being existential.  Sure, the world is evil, but only because a couple of bad apples are pulling the strings.  Let Arnold Schwarzenegger or somebody explode all the bad guys and all will be righted.

The truth, of course, as most adults grudgingly come to accept while somehow not descending into a wallowing pit of despair, is that the world is actually quite fucked up, society is deeply dysfunctional, and while individual humans can listen to the better angels of their nature, humanity as a whole has mostly allowed its collective id to run rampant.  Corporations aren't so much evil as avaricious, governments aren't so much repressive as bureaucratic, and people aren't so much cruel as blithely, banally self-centered.  That, of course, is a wholly unsatisfying answer, hence why conspiracy theories are so popular.

But this is all a roundabout way of introducing today's topic: the buddy system.  For most of you, of course, the buddy system is nothing more complex than elementary school kids holding hands in the pool or on a field trip so that the teacher can easily count the pairs.  But for members of the horror community, the buddy system has taken on a whole new meaning in recent years.

The buddy system conspiracy theory is (and I don't believe I'm misrepresenting it here) begins with Stephen King and Simon Schuster in the late eighties deciding to cripple one of their employees - a promising young writer named Bradley Snow - and then blackball him from the industry for the next thirty years.  During these three decades of unwarranted McCarthyism, the horror industry shriveled on the vine, being reduced to its current state of mostly being produced by small presses (which don't count and/or are simply porn.)  The other authors who came to prominence during this period are not "true" horror authors in the sense that no Scotsman who disagrees with your premise is true.  One can only surmise that had Snow been allowed to continue writing that we would be in a golden era of horror, perhaps one where the most popular show on television was a zombie saga and horror was consistently increasing in popularity across all media forms.  It is but to dream.

Of course, don't take my word for it.  Snow has been promising to publish a tell-all for years.  I think the back cover really says all you need to know about "the buddy system," and straight from the horse's mouth: 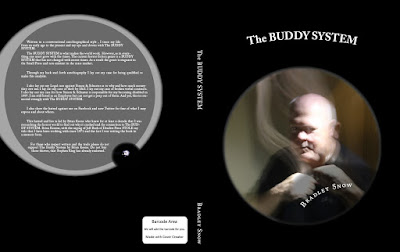 Of course, the conspiracy version of the buddy system is entirely the feverish creation of one dull-witted and mentally ill troll.  Now, to clarify, I suffer from mental illness myself and I have a great many friends who do as well.  But we have all either sought out help or learned to live with our conditions with the support of our friends and family.  Bradley Snow has decided to lash out at horror creators and publishers of all stripes, meaning that what's important about him is less the fact that he's clinically delusional and more the fact that he's an asshole.  You can certainly be mentally ill without being an asshole...but that's not the case here.  And while they may not all use the juvenile term "the buddy system," there are quite a few authors and schmauthors who feel the same way.

It's kind of a shame that the trolls have decided to latch onto this conspiracy concept because I think it's entirely possible that what an adult would call "nepotism," "favoritism," or even (were he struck by a fit of poesy) "the good ol' boy system" may be a concerning factor in the outcome of publishing deals.  Certainly, I've heard more than a few stories of very average novels getting major Big 5 deals before it's revealed that the author was the niece of a big time editor at Penguin or something similar.  So nepotism is certainly a possible factor in the state of publishing today, if you consider it doomed.

But what Snow and his ilk are describing is something far less insidious.  He's absolutely furious that big-name authors and publishers all seem to know each other and, what's worse, like each other and even sometimes help each other out.  There's nothing particularly confusing about that to the non-diseased mind.  Everybody in politics know each other, everybody in the recording industry knows each other (how often do you see hit singles "featuring" another recording artist), so why is it strange that everyone in the horror industry knows each other?

Horror authors (well, any authors, really) need to network to succeed.  I've been in I-don't-even-know-anymore-how-many anthologies with the likes of Jay Wilburn, Shana Festa, and even luminaries like Mark Tufo.  I've done a collaboration now with Stevie Kopas.  I've worked with four small presses and met friends and like-minded individuals at all of them, even at the ones I didn't ultimately publish with.  I've met horror authors at conventions and on Twitter and Facebook and all over the place.  We're all like-minded individuals setting out to succeed in a tough industry, and we often like each other.  Do I have enemies?  Sure, unfortunately.  Are there people I find distasteful and like to avoid?  Hell, yeah.  But for the most part, if you're a horror author, you're part of my tribe, and I'm going to help you any way I can.

Unless you act like Bradley Snow.  That's my one caveat.  If you've decided you're a frustrated author because a mythical "buddy system" is keeping you down, then you may as well just give up right now.  No one's going to welcome that kind of vitriol into their lives, and you're going to remain on the outside, unwelcomed by all.  Hell, I'm a frustrated author.  I don't have nearly the level of success that I'd like.  But instead of blaming others, I work constantly on becoming better at my craft and networking with my fans and, yes, other authors and publishers.  I don't want to alienate anyone who could potentially give me a hand up one day.

Now, where I would agree with Snow is if I felt that I had been given chances I didn't deserve because of my personal relationships.  If I felt that I was doing sub-par work and only getting published because of who I know, then that would be an issue.  But I haven't.  In fact, I was recently accepted into an anthology I'm very excited about and the editor assured me that I wouldn't have been accepted if my work wasn't up to snuff, and in fact he had broken the hearts of a few of his much older and closer friends because their work wasn't good enough.  That's the way this stuff really works.  Good relations will get your foot in the door, but only quality writing will get you accepted.

So what is the buddy system?  Just an excuse for poor writers to go on being terrible and blaming everyone but themselves for their lack of success.
Posted by Stephen Kozeniewski at 12:00 PM No comments:

If you live anywhere near central Pennsylvania, it would behoove you to stop by Carlisle High School this coming Saturday.  Carlisle High School SciFi Day is one of the best-run conventions that I attend.  The kids work really hard to take care of the vendors and guests.  And there is a lot of great charitable work that goes on. 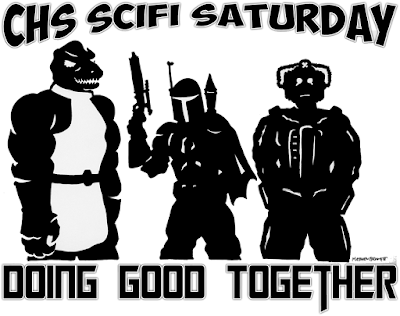 Hope to see you there!
Posted by Stephen Kozeniewski at 12:00 PM No comments: 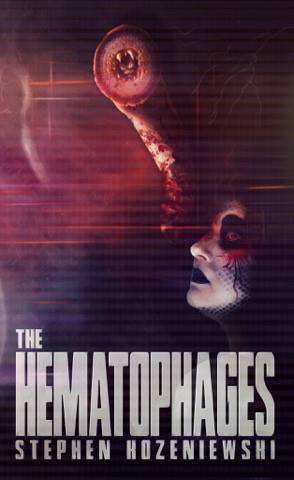 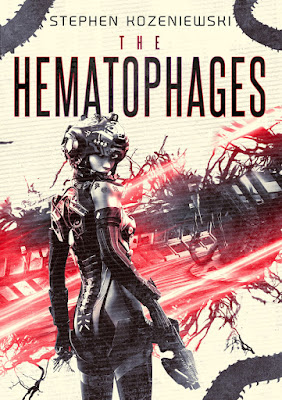 THE HEMATOPHAGES is now available in e-book and paperback formats through the following fine booksellers:

The Italian-language edition is available via Amazon Italy, Amazon US, and Kobo.  You can purchase the paperback from Dunwich Edizioni.

It's also got a page on Goodreads.

Here are the other places around the net where you can find THE HEMATOPHAGES:

Email ThisBlogThis!Share to TwitterShare to FacebookShare to Pinterest
Labels: The Hematophages

Hi everybody!  I'm very pleased to announce the release of my sixth novel, THE HEMATOPHAGES, from Sinister Grin Press.  It's something like a combination of "Office Space" and "Alien."  It's available now in e-book and paperback formats through the following fine booksellers:

You can also add it on Goodreads.

Doctoral student Paige Ambroziak is a “station bunny” – she’s never set foot off the deep space outpost where she grew up. But when she’s offered a small fortune to join a clandestine salvage mission, she jumps at the chance to leave the cutthroat world of academia behind.

Paige is convinced she’s been enlisted to find the legendary Manifest Destiny, a long-lost colonization vessel from an era before the corporations ruled Earth and its colonies. Whatever she’s looking for, though, rests in the blood-like seas of a planet-sized organism called a fleshworld.

Dangers abound for Paige and her shipmates. Flying outside charted space means competing corporations can shoot them on sight rather than respect their salvage rights. The area is also crawling with pirates like the ghoulish skin-wrappers, known for murdering anyone they can’t extort.

But the greatest threat to Paige’s mission is the nauseating alien parasites which infest the fleshworld. These lamprey-like monstrosities are used to swimming freely in an ocean of blood, and will happily spill a new one from the veins of the outsiders who have tainted their home. In just a few short, bone-chilling hours Paige learns that there are no limits to the depravity and violence of the grotesque nightmares known as…THE HEMATOPHAGES.
Posted by Stephen Kozeniewski at 12:00 PM No comments: