I recall vividly when Richard Nixon died.  I asked my father, "Aren't we happy about this?  Wasn't he a bad guy?"  My father told me, "No, you should never be happy that someone died."  And I've taken that to heart.  Never speak ill of the dead, they say, and I think that's important.  It's what makes us human and not ghouls.  Still, It's always struck me that there are different kinds of grief.  It's one thing when a beloved family member dies, another thing entirely when a celebrity who touched your life passes, and yet another when a childhood enemy dies.  All grief of a sort, but all different.

For the most part, when someone in the horror industry dies, I take note, but that's about the long and short of it.  When I hear that the key grip for "Friday the 13: Part II" passes away, I usually think, "Oh, that's a shame.  I'm sure his family will miss him, and the world is a bit less vivid without him."  But that's about it.  Occasionally, a titan like George Romero or Jack Ketchum passes, and I feel a different, perhaps stronger sense of grief.  These are people who have affected my life and work, even if I've never met them.

Today is something else entirely.  Today a man passed who I counted as a friend and a kindred spirit.  Frank Michaels Errington was, of course, most importantly a husband and a family man.  But to horror authors he was one of a handful of truly prolific reviewers.  I count him among the top tier of horror reviewers, alongside Christine Morgan, Sharon Stevenson, Nick Cato, and C.T. Phipps.

Frank read every single one of my books.  He certainly didn't care for them all, but I never felt, as I sometimes do, stung by his negative reviews.  Fundamentally, Frank was a decent person, and I think he understood that authors are people, and that slinging shit across the internet might be fun in a perverse way, but it doesn't help anyone improve their craft, and it doesn't do readers any good.

Frank's reviews were always excellent and, perhaps more importantly, correct, in the sense that any review can be "correct."  As I said, he never felt the need to slam an author, even if he didn't like his or her work.  He was fair and detailed and his thoughts rang true.

What I think people don't necessarily know about book reviewers is that they're generous.  Generous with their time, generous with their thoughts, and generous with their money.  But Frank was a special case.  He was a fixture in the central Pennsylvania horror community, which is quite a feat, considering he hailed from Norristown, my hometown.  I know that drive well.  That's a two hour plus drive along a toll road.

But I can't recall ever attending a signing, film debut, convention, or event in this area without Frank appearing at some point.  And never once did I see Frank when he didn't buy one of my books.  That streak, sadly, will remain unbroken.  The last time I saw Frank, at the White Rose Comic Con, he told me he had all of my books (obviously) but was still going to buy one of my re-releases because he like to support authors.

He liked to support authors.  Perhaps that's all that needs to be said about Frank.

But there's more, of course.  Frank led a great, rich, and full life.  He was thoughtful.  And kind.  He was a gentleman, in every meaningful sense of that word.  He was warm and kind and inviting, and, as I said, he was there.  Always there.  Always supportive.  He was beloved and recognized by everyone in the community (you need only glance at your Facebook feed this morning to feel that in full force.)  And yet I always found his humility striking, if striking is the right word for someone so humble.  People always recognized him and embraced him warmly, but he always affected an "Aw, shucks" sensibility, like he was nobody very important.

But he was important.  To all of us.  One of the greats, as I said earlier, in the community of reviewers.  And one of the greats in the community of mankind.  We are diminished by his loss.  But most diminished, of course, is his family, and I wish them great strength in facing the grief ahead.  If it means anything to you, know that Frank was recognized by his adopted horror family, that we will miss him.
Posted by Stephen Kozeniewski at 10:49 AM 4 comments: 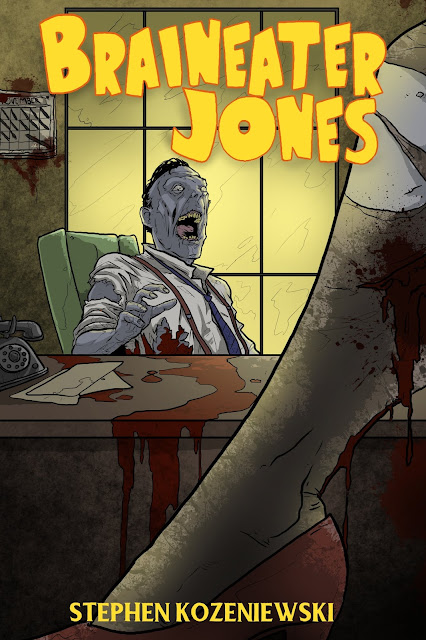 Hey, everybody!  I'm very pleased, in conjunction with our good friends at BookBub, to announce that BRAINEATER JONES is on sale for only $0.99 across all platforms in the United States.  I hope you'll pick up a copy.

Hey Splatter fans, I've got a free audiobook (or three) for each of you:

As you may have heard, Audible promo codes are expiring in November. So if I don't get rid of them now they'll just go to waste. So e-mail me (skozeniewski at yahoo) for one, two, or, hell, all three. Hope to hear from you! 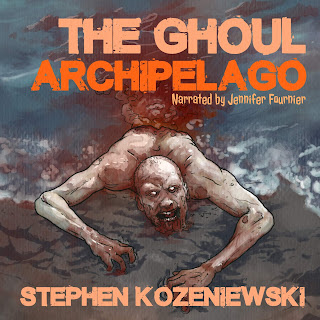 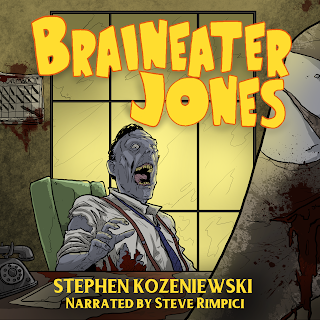 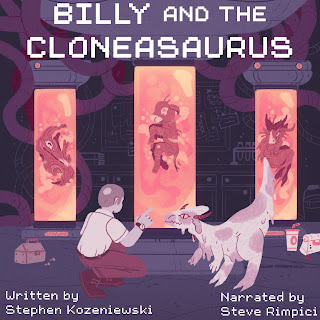 Email ThisBlogThis!Share to TwitterShare to FacebookShare to Pinterest
Labels: Billy and the Cloneasaurus, Braineater Jones, The Ghoul Archipelago

Hey, everybody!  Hope you all enjoyed the penultimate "Game of Thrones" last night.  I wrote about it a bit over on the group blog.  Check it out!

Posted by Stephen Kozeniewski at 10:02 PM No comments:

Hey everybody!  I was delighted to be featured as the guest on the season premiere of Necrocasticon.  Click on the banner below to check it out!

Posted by Stephen Kozeniewski at 3:18 PM No comments: