BILLY AND THE CLONEASAURUS is Back, in Audiobook Form! 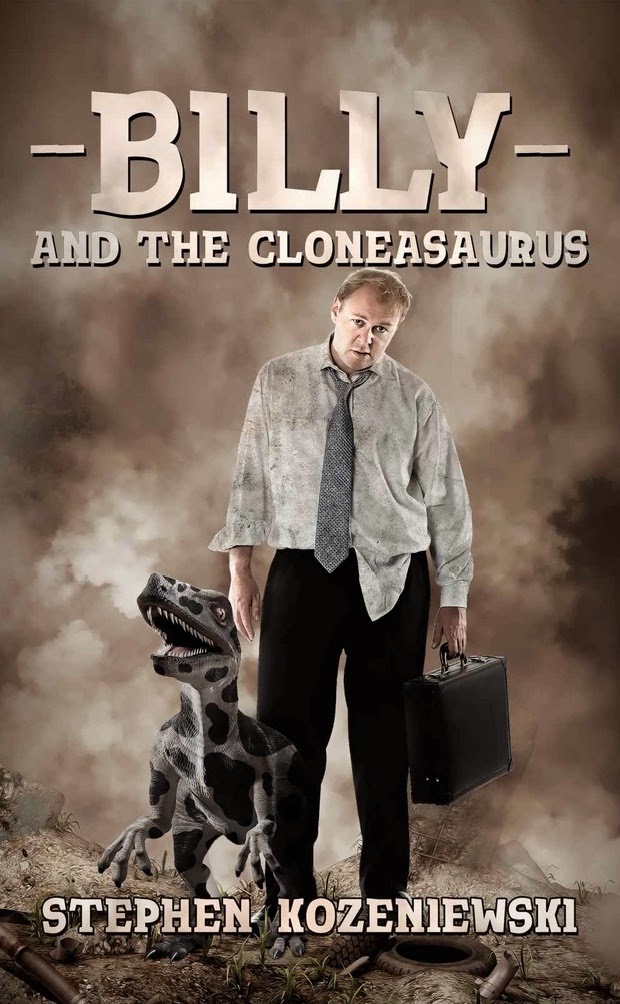 BILLY AND THE CLONEASAURUS is now available as an audiobook!  You can purchase it from:

If you've never read BATC, this is now the premiere way to experience it.  And if you have, why not take a moment to revisit it, enjoying the dulcet tones of Voiceover Arts Awards-nominated Steve Rimpici?
Posted by Stephen Kozeniewski at 12:00 PM No comments:

Hey kids!  As you can probably tell by this point I am a big proponent of the Scares That Care charity.  Scares That Care is a horror-themed charity organization which benefits a different set of three ill people each year: a victim of pediatric cancer, a victim of breast cancer, and a burn victim.  I attended the Scares That Care Weekend last July (and I'll be attending again this July) which is an absolute must-attend for anyone who's a fan of horror literature.

But Scares That Care isn't just a one-weekend event.  They have pop-up events and charity drives all throughout the year.  For instance, I attended the 24-hour Horror Show telethon in January which raised over $10,000 for the deserving families.  And this weekend I'll be attending the STC Shrimp Feast in Baltimore, MD.

This isn't exactly an open event, because tickets were sold and I'm not sure if they'll be available at the door.  But if you are present, and you want to talk to me or have me sign a book, cool.  I'll also have a few books in my car, but, trust me, bookselling won't be my focus.  I'll probably have to grab a few dozen wet naps to clean off before I sign anything for you.  And if you just happen to be in the area, tweet or FB me and I'll meet you in the parking lot to sell you some books, provided you promise not to bone collect me.

The Shrimp Feast will be at:

Hope to see you there!
Posted by Stephen Kozeniewski at 12:00 PM No comments:

Hey kids!  I haven't forgotten about the Re-Animated series, I've just been bogged down a bit lately.  We'll get back to it, but not today, despite appearances.

With Re-Animated being focused on adult animation, I hadn't originally intended to cover the gorgeous, brilliant, but children-focused early '00s Cartoon Network series "Samurai Jack."  Recently, though, a change has occurred which has made me re-evaluate that decision.

"Samurai Jack" original ran for four 13-episode seasons from 2000-2004.  The show never got a series finale, so the story was never officially finished, although due to the time-travel-centric nature of the show (SPOILERS from here on out) the viewer learned Jack's fate: after walking the earth for many years, maybe decades, he finally returns to the past as a wizened warrior-king, a far cry from the humble samurai we had watched and loved for four seasons.

As a children's show, never showing this evolution made sense.  "Samurai Jack" didn't precisely hit the reset button each week, but it wasn't exactly fucking "Breaking Bad" either.  The set-up was that our blank slate warrior ran into a crazy sci-fi conundrum each week and solved it through the power of Batman-level fighting skills and a noble heart dedicated to bushido.  Kids weren't exactly going to tune in for "Jack loses his way and goes grimdark," (though one suspects the brilliant minds behind the show could've made even that work.)

Thirteen years after its cancellation, though - now, in other words - the kids and teens who watched the show during its original run are now in their twenties and thirties.  And with the advent of Cartoon Network's adult swim brand, there's even a home for grimdark Jack.  And we've been fortunate enough to get it.

But this is not the Re-Animated entry on "Samurai Jack," and I fear I've droned on too long already about the whys and wherefores of this show.  My actual intent with this entry is to address something that's been weighing on my mind all week since the Saturday premiere of the new season (remember, SPOILERS already abound):

Now, I've been known in the past to complete over-analyze TV shows and even fuck my analysis completely up.  So it's possible I'm being premature on this one, maybe even likely, but just go with me on this, if you please.

Here's what we know with certitude based on the first new episode of "Samurai Jack": Aku has abandoned his cult.  The cultists intend to kill Jack for the stated purpose of catching Aku's attention and bringing them back to him.  So we know that he was once with them, and abandoned them for unknown reasons.  They're not just crazies who took to worshipping Aku as a distant unknown.  He was there and then he wasn't.

And here's a second, mildly interesting factoid: Aku does not narrate the opening introduction as he did through the entire run of the original four seasons.  Jack is a terse, laconic character.  It doesn't make much sense that he would unspool his origin story a whole lot.  We get a glimpse of what a Jack-narrated introduction might have sounded like in the early episode "Jack in Space" - and with it, a clear idea of why Aku always narrates instead.  Jack is too humble to unfurl the story with clarity.  Aku, on the other hand, is a braggadocious blowhard, one who will talk himself up, and talk all the appropriate shit about Jack.  By flipping the script suddenly in season 5, a shift is obviously intended.  This season has so far been a closer examination of Jack's psyche, so it makes sense that the new introduction is from his own lips.  But it also again raises the question: where's Aku?

At first this made me wonder if Aku has totally gone missing from the world.  But then, later on in the episode Scaramouche, a robotic assassin, challenges Jack and claims to be Aku's favorite.  Okay, so maybe Aku is still around.  Then, when he learns the crucial piece of information that Jack has lost his sword - the only weapon which can harm Aku - Scaramouche calls Aku on the phone to let him know...

1)  The creators of "Samurai Jack" decided to re-cast Aku using someone who is absolutely unrecognizable in the very distinct role of Aku, or

I can't really fathom why they would opt for the first choice.  But, okay, let's ignore our meta knowledge.  Let's just look at just what we know in-show.  The voice on the phone, instead of saying, "Yes, Scaramouche, my most trusted assassin?" says with irritation "Who is this?"  This leads to two further possibilities:

1)  This is really Aku, Scaramouche got his phone number, and yet Aku doesn't recognize a guy he gave his number to...which is really weird considering how secretive Aku is in 99% of instances.  Jack has, in the past, gone to great lengths just to get an audience with him.

2)  Scaramouche is a blowhard (this is borne out by, well, all of his behavior up to and after this point) and he doesn't actually have Aku's digits.  He just pulled the old joke of, "Oh let me call so-and-so" and dialed a random or simply different number.

Again, I'm hard-pressed to see why the answer would be the first one.  It's possible that this is another goofy ol' Aku joke, like the show sometimes likes to play.  But when you couple this phone call with the rest of the information in the episode - Aku never appears, the cultists are no longer in contact with him, and perhaps most interesting of all, Aku no longer narrates the introduction, we're suddenly presented with what I think is a mystery:

Nothing can kill him except Jack's sword...which is missing.  Again, with the caveat that I may be utterly over-analyzing this whole thing, "Samurai Jack" has always been a simple show, one that largely wears its heart on its sleeve.  Jack has lost his purpose - which is to defeat Aku - because he has literally lost his purpose.  Aku has already been defeated.  Aku is gone, and without his nemesis, Jack is lost.  At least, in my humble opinion.  Otherwise, why would a show that essentially has only two characters reboot with one of those characters unseen for an entire episode?  Amongst all the other hints we've seen here.

What do you think?  Let me know in the comments below.
Posted by Stephen Kozeniewski at 1:16 PM No comments:

Call to Action: Help Me Win the Podcast Wars

It has been brought to my attention recently in a moment of kind, private, candor that my interview on The Horror Show With Brian Keene is now the least popular episode of all time.  OF.  ALL.  TIME.

I have no recourse but to attempt to unfuck that.  And so it is with a heavy heart that I must ask you, my beloved fans and friends, to do one or all of the following:

a)  Listen to the episode

c)  Share the episode link all up and down social media

d)  Encourage your friends to listen to the episode

Part A couldn't be any easier.  Since you're here, all you have to do is click the right-pointing triangle below:

Thanks for the support, everybody!
Posted by Stephen Kozeniewski at 3:07 PM No comments: