I'm delighted to be included in CLICKERS FOREVER, a tribute anthology to J.F. Gonzalez coming soon from Thunderstorm Books.  My short, entitled "Deep Into That Dark One Peering" is about what happens when you try to train a monster to be human ("Hellboy" she ain't.)  I'm also seriously looking forward to reading the other entries, which includes such luminaries as Jonathan Maberry, David Schow, and Monica J. O'Rourke.  The full Table of Contents is below! 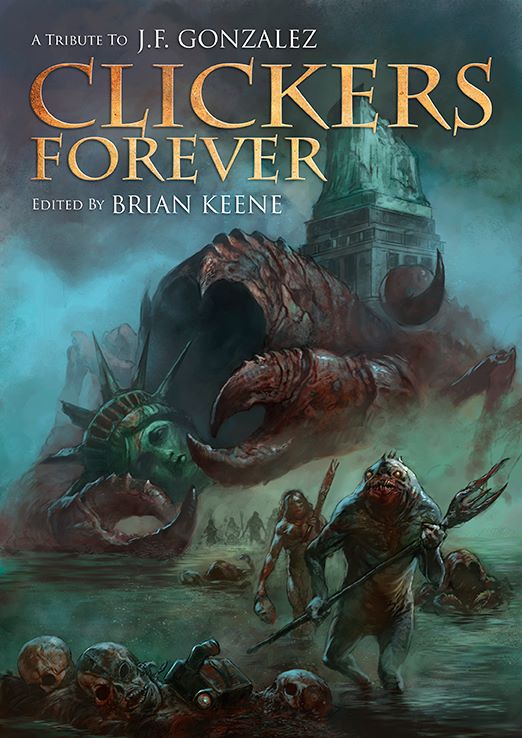 "Captivity" by J.F. Gonzalez
“That Goddamn Grin” by Robert Ford
“Vanilla Sunshine” by Jonathan Janz
“Books with Bite” by Jonathan Maberry
“Back from the Dead” by Mike Lombardo
“Bangers and Mash” by Matt Hayward
“Garage Clicker” by John Urbancik
“On the Contributions of J.F. Gonzalez to Horror Literature” by Mary SanGiovanni
“My Own Personal Jesus” by Wayne Allen Sallee
“Algorithms of the Heart” by Mike Oliveri
“Moist Air” by Adam Cesare
“On Clickers II” by J.F. Gonzalez
“Clickers vs. Mandibles: The Tale of an Unwritten Saga” by Jeff Strand
“Ten Secrets to Survival Clickers Don’t Want You to Know (They Really Hate Number Six)” by Jeff Burk
“A Birthday Party for Jenny Too Good” by Gord Rollo
“Belief” by Lesley Conner
“Shooting Schedule” by J.F. Gonzalez
“WWJD: Collaborating with J.F. Gonzalez” by Wrath James White
“Only One Way to Write the End of the Individual: J. F. Gonzalez’s The Corporation” by Nick Mamatas
“Gracias, hermano: a letter to a man I never met” by Gabino Iglesias
“Deep into That Dark One Peering” by Stephen Kozeniewski
“At the Corner of Flanders and Phillipsport” by Michael T. Huyck Jr.
“Surfing Is My Life: Fear and Loathing on the Northern California Coast” by Gene O’Neill
“The Folly of the Dead, or, I’m Pretty Sure My Buddy Is A Serial Killer” by Geoff Cooper
“The Survival of Horror: A Tribute to J.F. Gonzalez’s Survivor” by Matt Serafini
“For You, Anything” by Wesley Southard
“WonderClaws™” by Monica J. O’Rourke
“Throwing Books” by Dave Thomas
“Clickbusters” by Amber Fallon
“Night Run” by Kristopher Rufty
“A Bad Influence” by Robert Swartwood
“Grab” by Jay Wilburn
“Ku Klux Clickers” by Wile E. Young
“My Own Private L.A. Gangsta” by Weston Ochse
“Jesus and the Splatterpunks: An Oral History” by David J. Schow, John Skipp, and Brian Keene
“Bleeding Through” by Charles Rutledge
“Mabel’s Recipes” by J.F. Gonzalez
“To the Bitter End” by Kyle Lybeck
“Complications Of” by Kelli Owen
Posted by Stephen Kozeniewski at 12:00 PM No comments: