Hey, everybody!  Starting Friday the blog is going all Women in Horror Month, all the time for February, so I'm going to slip this announcement a skosh early.  The weekend after next (February 8-10) I'm going to be appearing at Farpoint in Baltimore, MD.  The address is:

Celebrity guests include Wallace Shawn as well as the real-life duo of Pinky and the Brain, Maurice LaMarche and Rob Paulsen.  So if you'll be in the area, swing by!  I won't have a table, but there will be several opportunities to get my autograph if you're into that sort of thing.

I'll be making the following appearances:


From exoplanets to artificial worlds, our panel of scientists take you through what we know to help you build fictional worlds.  Are you working with double moons?  Ice planets?  Life on an asteroid?  How does this affect the kind of life that would evolve there?  Put the best science in your fiction.


A discussion of how to use podcasting and other new media to tell your stories.


The publishing landscape has changed drastically in the last five to ten years.  Our panelists will talk about your options for getting published in 2019 (and beyond), as well as how to navigate the strange new world of being a contemporary writer.


We've all seen what life is like serving in fictional militaries like Starfleet, the Rebel Alliance, or the Colonial Forces.  Our panel of veterans and authors will discuss how that compares to serving in today's military.


Twitter, Instagram, Facebook and the like can seem daunting to the uninitiated.  But, if you want to be an author (or any kind of business person, really) ignoring social media is like leaving fans (and money) on the table.  Our panelists will discuss tips, tricks, and best practices for getting the most out of your internet platform.

Dystopian fantasy. Sci-fi horror. Steampunk epic. Not all stories fit neatly into one genre or another. On this panel, we'll talk about some of our favorite genre mash-ups, and how to approach them as writers.

Women in Horror Month 2019 (and Retrospective)

Hey everybody!  February is right around the corner.  And you know what that means...

I'm delighted to announce for the fourth year in a row I'll be hosting a Women in Horror Month interview series here on Manuscripts Burn.  Now, the last two years I posted apologias outlining why I believe in WiHM and why I participate in it every year.  I'd just be repeating myself if I did that again, so you can review those here and here if you have any doubts or qualms about the celebration.

In the meantime, I thought it might be nice to collect links to all of my previous interviews all in one place.  Feel free to catch up before the new entries start this Friday, February 1.  Hope to see you then!

You Don't Know What You've Got 'Til It's Gone

I've been a federal employee - a civil servant, people used to say - for fifteen years.  I joined the army in 2004 and served for a bout four and a half years.  After a brief and miserable stint in the private sector working for a dental insurance company for less than a year, I returned to the army to work as a civilian.  Since then I've worked for the army and the navy as a medical clerk, a secretary at a substance abuse clinic, and in a variety of financial management positions.

In that time I've served under three very different presidents.  The landscape of politics has changed immeasurably.  One thing which hasn't really changed much is a certain level of disdain, sometimes veering into hostility, toward federal workers.  In the best of times people would complain about how I had a pension, cheap healthcare, thirty vacation days a year, and eleven federal holidays off, and how nobody in the private sector was getting anything like that anymore.  My response to that was typically "Why don't you unionize, then?" or, if I'm being more accurate, "Why did you let conservatives chip away at organized labor and its protections for the last forty years if you wanted those things for yourselves?"  But that's a subject for a whole other blogpost.

The lowest ebb of my admittedly short tenure was when Sarah Palin declared that the federal government had never created a single solitary job.  For years that became a common refrain in conservative circles.

It was bullshit at the time, and it made me roll my eyes.  With a workforce of two million, the federal government is the largest single employer in the United States.  That's not counting contractors, of course, who constitute about four million employees.  If you throw in half a million postal workers, one-and-a-half million active duty military members, and another one-and-a-half million grant employees, the total is nearly ten million.

The labor force in America is about 162 million, which means that Uncle Sam is directly cutting a check to an eye-blistering 6% of the population.  And that's not even getting into the ancillary businesses - restaurants outside of a government building, or dry cleaners which wouldn't exist except for the military base in town, etc.  At that point the numbers get kind of cutesy, so I'm just going to leave that alone, except to point out that, yeah, with 6% of the population not getting a paycheck, a significant portion of the other 94% is going to feel the pain.

Of course, we're not in that kind of a doomsday scenario now.  A scant quarter of the government is shut down, and with it, nearly 800,000 federal workers - disregarding, of course, all of the collateral contractors, etc.

And now I'm watching - not without a certain amount of perverse glee, I'll be the first to admit - as the people who shat all over what I do for a decade and a half are are coming face-to-face with the reality that we're not all leeches.  That we do, in fact, serve a purpose.  And that the federal government, Governor Palin, does in fact create jobs.  Nearly 6% of them, and that's if we're being extremely modest.

I'm also watching with some glee to learn that my fellow civil servants are turning to some tried-and-true old organized labor methods to express their displeasure.  Many TSA agents are calling out sick.  Other departments are finding their unpaid workforce decimated by requests for hardship leave.  I wonder to what extent slowdowns and work-to-rules and other job actions are also taking place now.

It's very easy for Republicans to shrug and say, "Ah, well, nobody would miss the government anyway."  Now that we're actually seeing it, for, realistically speaking the first time ever, I'm delighted.  Not by the hardship and suffering of my fellow civil servants, that is a terrible outcome.  I'm delighted that everyone who's ever complained about how the government doesn't do anything, and how we're all useless is being forced to eat their words.  In a few weeks when Joe Six-Pack doesn't get his tax refund, it's going to be anarchy on the streets.
Posted by Stephen Kozeniewski at 12:00 PM No comments: I'm delighted to introduce you all to the first film I've been involved with: "Welcome to Daisyland."  Specifically, I wrote episode 2, "The Voice." 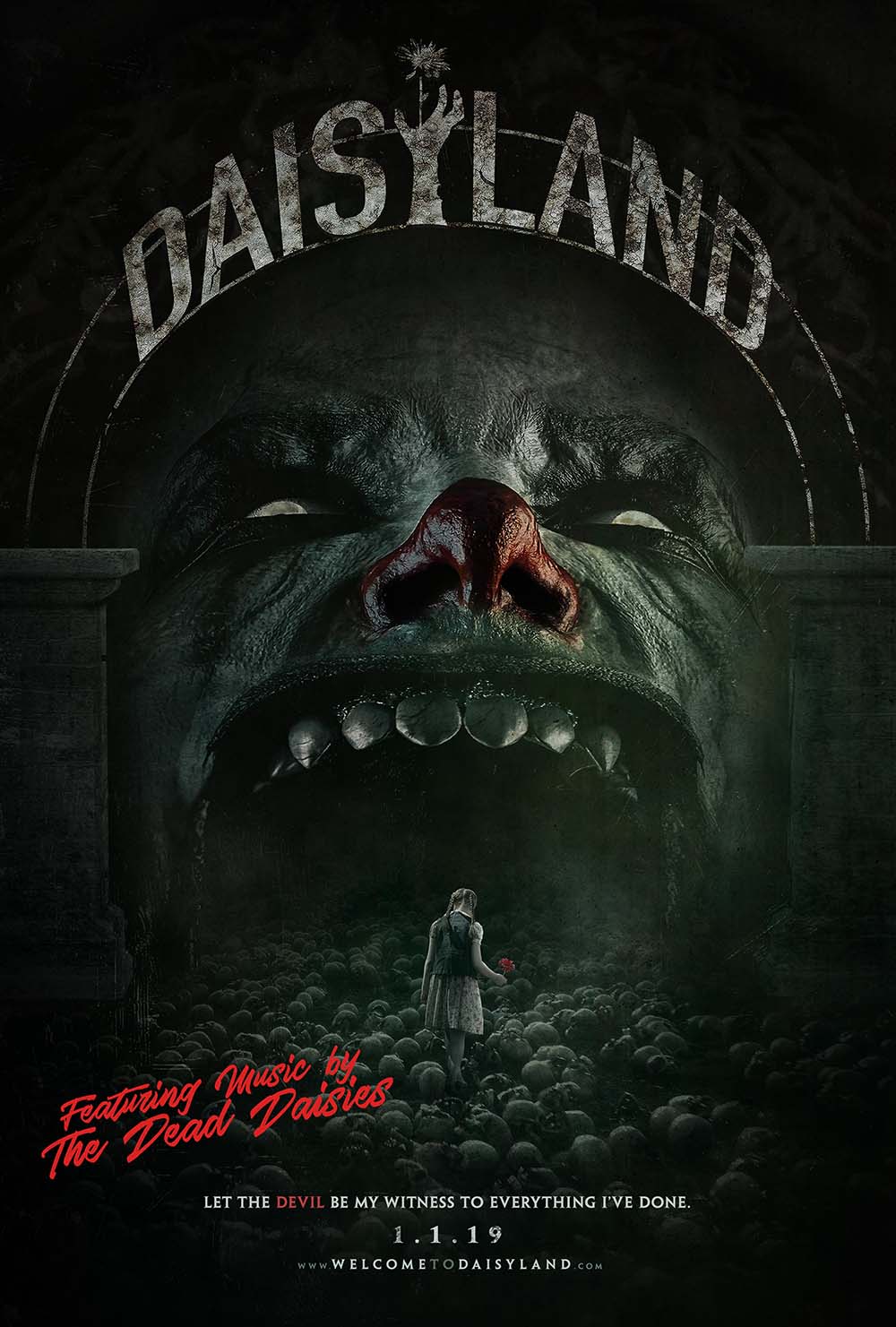 Here's where you can find out more about "Welcome to Daisyland" around the internet:


Posted by Stephen Kozeniewski at 12:00 PM No comments:

Email ThisBlogThis!Share to TwitterShare to FacebookShare to Pinterest
Labels: Welcome to Daisyland

Google Search: I Dreamt About (redirect)

Hey, everybody!  Over on my group blog Across the Board I wrote a little bit about people's dreams.  Rather than just copy it here, I thought I'd leave one of my periodic reminders to go check out the group site.  It's got a lot more contributors than just me, and that diversity of thought is fun to look over.

Check it out!
Posted by Stephen Kozeniewski at 12:00 PM No comments:

Hey, everybody!  As the new year gears up, let's take a look back at what's gone before.  Based solely on number of views as of January 1, here are the top ten most popular posts of 2018 on ye olde blogge:

6.  The Long, Hard Reach for that Brass Ring

5.  Women in Horror Month #1: Suzanne Madron, Author of FOR SALE OR RENT

1.  Mascara and a Rifle: Women in the Military (Guest Post by Dacia M. Arnold)

So, what can we learn from this information?  What are the most interesting posts that people want to see?  Based on the evidence, I think the conclusion is clear: no fucking idea.  What the hell do you people want?  You're all over the fucking place here.  Get it together.
Posted by Stephen Kozeniewski at 2:14 PM No comments:

Here is my schedule of appearances for 2019.  As changes occur, I will update this page, so be sure to check back often.  Events in red have occurred in the past.

If you'd like me to make an appearance at a convention, signing, or other event you're organizing or attending, feel free to contact me and we'll discuss it. Most events in Baltimore or Philadelphia are a slam dunk for me to attend, but I'll consider travelling if invited.