Enter to Win an Autographed Copy of PRESSURE by Brian Keene 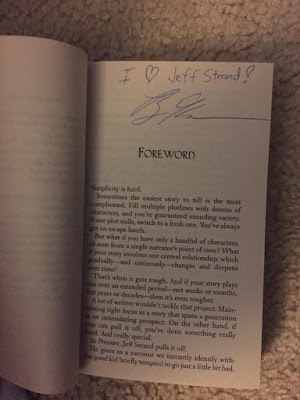 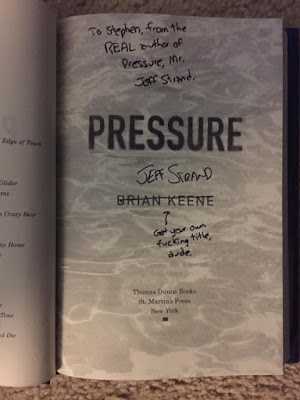 a Rafflecopter giveaway
Posted by Stephen Kozeniewski at 4:01 PM No comments:

BILLY AND THE CLONEASAURUS $0.99 sale 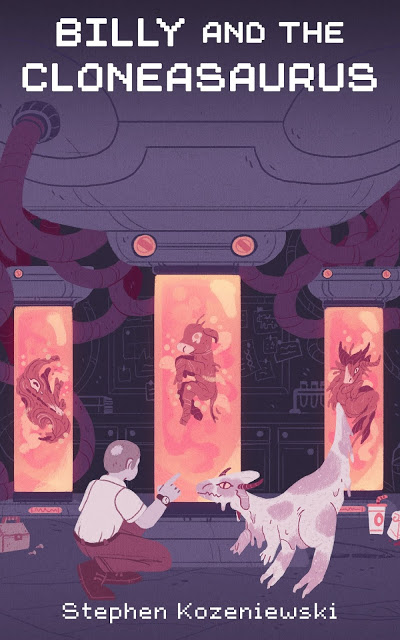 Hey everybody!  For the next week only, BILLY AND THE CLONEASAURUS will be on sale across all platforms for only $0.99.  That means you can pick it up via Amazon, Barnes and Noble, Kobo, Google Play, and iTunes.  If you haven't grabbed a copy yet, now is the perfect time!

Six billion identical clones make up the entire population of Earth, and William 790-6 (57th Iteration) is exactly like everybody else. In his one year of life he will toil in suburban mediocrity and spend as much cash as possible in order to please his corporate masters. When 790’s first birthday (and scheduled execution) finally rolls around, a freak accident spares his life.

Living past his expiration date changes 790 profoundly. Unlike other clones he becomes capable of questioning the futility of his own existence. Seeking answers in the wilderness, he discovers a windmill with some very strange occupants, including a freakish, dinosaur-like monstrosity. Which is especially strange since every animal on earth is supposed to be extinct…

Dark, haunting, and blisteringly satirical, BILLY AND THE CLONEASAURUS is the story of one “man’s” attempt to finally become an individual in a world of copies.
Posted by Stephen Kozeniewski at 3:22 PM No comments:

French Press Paperbacks For Sale (And Severed Press Remainders, Too!) 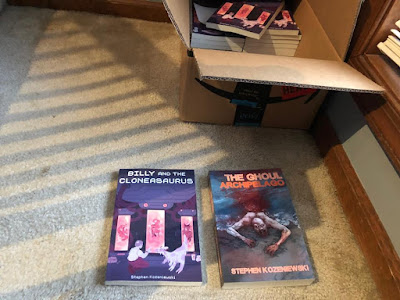 Hey everybody!  I just ordered my first batch of the Authors Preferred Editions of BILLY AND THE CLONEASAURUS and THE GHOUL ARCHIPELAGO.  Contributor copies have been distributed, which means I am now open to start selling these at conventions and book signings.

But, of course, as a follower of this fine web log, you get the first crack at everything Kozeniewski-related, and this development is no exception.  Remember, if you'd like to order an autographed copy of these (or any of my books, really) just reach out to me.

In addition to the two French Press titles, I should probably also point out that my supplies of the original Severed Press paperbacks are dwindling.  I have about ten or fifteen of each, and as they are no longer being produced, when they're gone they're gone.  Unless you've bought a paperback in the past, as far as I know I'm in possession of the last copies in the world.  And they could be yours!
Posted by Stephen Kozeniewski at 12:00 PM No comments:

Email ThisBlogThis!Share to TwitterShare to FacebookShare to Pinterest
Labels: Billy and the Cloneasaurus, The Ghoul Archipelago 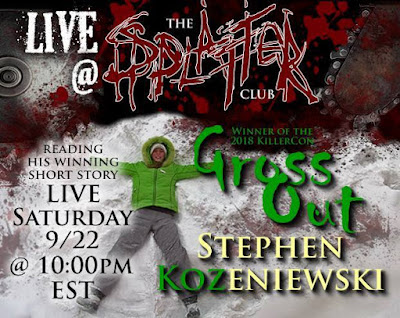 Hey everybody!  I've got a rare treat for you (and a first for me) coming up this week.  If you've never seen me do a live reading this is your chance.  This Saturday, September 22, at 10:00 pm EST I'll be reading my award-winning entry in the 2018 Deadite Press Gross-Out Contest, "Everybody Poops.  Especially Godzilla."

It's going to be live on Facebook, so you can watch from anywhere in the world!  All you have to do is join The Splatter Club on Facebook and tune in at 10.  I'm sure I'll also be taking a Q&A and whatever else you guys feel like hearing from me.  Hope to see you there!
Posted by Stephen Kozeniewski at 11:01 PM No comments:

A Wife Beater's Guide to the Apocalypse

Hey, everybody!  So I just finished reading THE NIGHT LAND by William Hope Hodgson.  Now, I recently read THE HOUSE ON THE BORDERLAND, and that was a little old-fashioned, but overall pretty tight.  So I was pretty excited to read Hodgson's magnum opus.  Early twentieth century apocalyptic fiction from the man who Lovecraft looked up to?  Got to be pretty good, right?  Well, let me see if I can recreate the experience for you and you can decide for yourself.


THE NIGHT LAND: A WIFE BEATER'S GUIDE TO THE APOCALYPSE
by William Hope Hodgson as understood by Stephen Kozeniewski

And, lo, did it did be that I was in the 18th century briefly for a framing story, but, verily, that framing story was abandoned quickly and never revisited.

And, lo, did it did be, that in the far flung future of some supernal age that there did rise from the ground a great pyramid.  And it did be that the pyramid did be full of millions upon millions of people, and these did be the last of the people.

And, lo, did it did be, verily, that, truth be told, and in sooth, that it did be that there was no sun and that the land did be populated by monsters.  Verily, though, did it be that those monsters were all quite dull, and fighting them did always consist of the exact same thing, which did be that I did have a hand weapon, and it did be with this hand weapon that verily I did slay many a monster, which might a humpback or a giant slug, but never of any particular interest or apparent danger.

And, lo, did it did be that I left the pyramid, and though, verily, the term "Mary Sue," though, lo, it did not be invented yet, yet still, all the millions of the greater pyramid did be totally stoked on me and admired me just for my pure ballsiness in leaving yon Great Redoubt.

And, lo, did it did be that after monotonously fighting many monsters, whether they be humpbacks or slugs, all inspiring the exact same amount of total lack of what did be dread in me, I did come upon my fair maid, who, lo, though she yet did have a name, I constantly did call "a maid" or "mine own."

And, lo, did it did be that mine own maid did have the gall to speak to me while looking in mine eyes.  And thus did I did cut a great switch from a tree and thus did I verily beat the ever-living shit out of her, but also did I feel bad, for I do be the hero of this story, and all the many millions of the great pyramid are super stoked on me and do be totally watching me from afar and do be rooting for me heartily.

And, lo, did it did be that it, being the eighteenth hour, we did quaff upon powdered water and precisely three pills apiece this time.  And now I shall abridge the rest of the pill-eating and water quaffing, for brevity's sake.  Oh, but also at the third hour did we quaff upon powdered water and then exactly one pill, the Night Land being terrible hard to live in and populated with dull, dull monsters.

And, lo, did it did be that just as we were sliding into home plate, did she did die, and thus, could I no longer beat her with switches, and no longer could feel sort of bad about, but also insist that beating maids with switches is really the only way to communicate with such creatures.  (It seems a shame almost, that I did never bother to try to beat any of the slugs or humpbacked men with switches, being as it do be the best way to communicate with such alien minds.)

And, lo, did it did be that she was alive again, for no reason.  And thus did everyone in the Great Pyramid totally cheer and build of me a statue, and just generally be unreasonably stoked on me.  (Please see Appendix A for a complete chart of pill-eating and powdered water quaffing rates.)

Hey, everybody!  Happy Labor Day!  While you're hopefully twistin' by the pool, I've got an event announcement for this weekend, so start thinking about whether you'll be able to make it.

If you're going to be in the Baltimore, MD area this weekend you should definitely stop by Protean Books on Saturday, September 8.  I'll be signing along with horror luminaries Brian Keene, Mary SanGiovanni, and Wesley Southard.  I'll be selling books for $12 apiece and I'll be happy to sign any you bring from home free of charge.  We are asking that you buy a little something from the bookstore for hosting us - a cup of coffee would be fine.  That's the kind of walk-in business they're counting on to make it worthwhile to invite us in the future.