I know this isn't really a website dedicated to Warhammer or the art/science of model painting, but, hey Sundays are a day to switch it up a little, and this is a hobby of mine. These are models of giant spiders that the newly resurrected Forest Goblins ride into battle. Even as a layman you're probably familiar with goblins (think the Mines of Moria in the first Lord of the Rings movie.) Forest Goblins are aboriginal type goblins that worship spider totems. I haven't done the riders yet, but here are the mounts that I've painted so far: 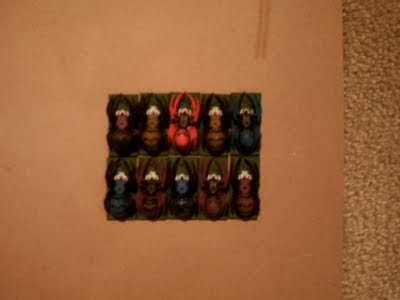 This is the view from above. The mount for the leader is painted in the style of a Black Widow, with a red skull instead of an hourglass on its back. (They come with skull patterns.) I originally left the legs black like a real Black Widow, but ultimately decided red legs would look better. 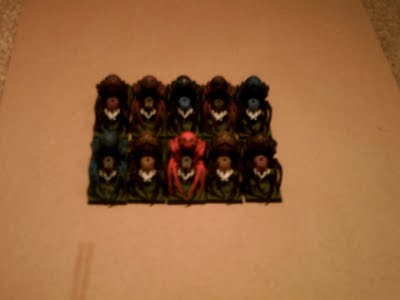 This is the view from the front. You'll also note I painted two spiders like Brown Recluses. These mounts are for the unit's musician and standard bearer, which are important, but not as important as the unit's leader. So I opted for the second deadliest spiders in the world for these two. Also note that these are the only two spiders painted in the same pattern. 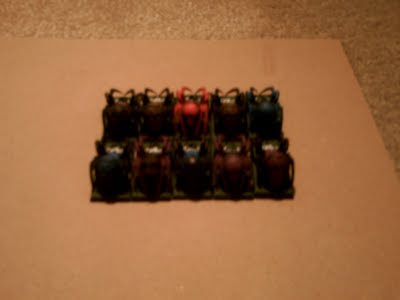 And, this is, of course, the view of the spiders' asses. The rest of the mounts for the regular warriors are painted in blues and purples, which aren't based on any real world spiders, but seem like good "venom" themed colors. It may be hard to tell from these photos, but none of the spiders (except the Brown Recluses as noted above) are painted in the same pattern. Some have purple legs and others have purple bodies, etc. etc. If I get more spider riders I may have to start repeating myself, but for now I'm pretty satisfied.

So, there you have it, a little something different for Multimedia Sunday this week. Tomorrow: back to the story.

Posted by Stephen Kozeniewski at 7:40 PM