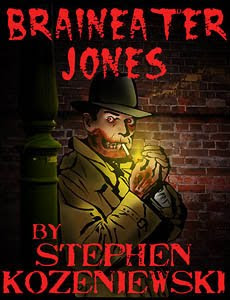 With NaNoWriMo complete, I thought I would show off this magnificent cover design for Braineater Jones, brought to you by http://www.greglynnmurals.com/. And, just to cap it off, a brief little excerpt from my far-from-finished product:

I woke up dead this morning.

Shit. It’s after midnight. It wasn’t this morning. Better start over.

I woke up dead this morning. Yesterday morning. Whatever you want to consider it.

As in, no pulse, no breathing, dead.

I mean, I’ve woken up a lot (I think) and who really thinks about whether they’re breathing or not? Who notices their heart’s not beating? It’s not something you’re totally aware of. It took me a while to figure it out.

It took me less time to figure out I was stark, bare-ass naked.

I guess they did that to me. Whoever killed me. They must’ve stripped me. I don’t know if they wanted my clothes or my money. Or maybe they just didn’t want me to be identified. But then, why didn’t they smash in my teeth or burn off my fingerprints or something?

I was floating face down in a swimming pool. I lay there for a long time, with my eyes open, starting at the bottom of the pool, before I realized I wasn’t breathing.

Here’s the other thing: I have no idea who I am or how I got in this state.

I’m keeping this journal so I can get my thoughts straight while I try to work this all out.

Here’s what I know so far.

First of all, somebody killed me. Did I mention that already? I think I did. Anyway, after I woke up naked, one of the first things I noticed was the big gaping hole in my chest. I could stick my finger through it. I probably could’ve stuck my fist through it.

I don’t remember much about guns. Of course, that’s assuming I ever knew anything about them. But what kind of gun does something like that? One thinks not a handgun. Maybe some big brutal hand cannon. Or a shotgun. But, then, aren’t shotguns scattered? It was a solid hole.

So. Somebody killed me. Presumably for a reason, unless they really did just flip out and strip me naked and didn’t plan any of it ahead of time. So what was the reason? Well, I aim to find that out. Let me put that in my list of questions.

I guess while I’m doing that I’d better figure out who it was.

Email ThisBlogThis!Share to TwitterShare to FacebookShare to Pinterest
Labels: NaNoWriMo