Women in Horror Month #6: Kelly A. Evans, Author of THE MORTECARNI

Hi all!  Last year I got a comment right here on the blog, requesting to be a part of the WiHM interview series for 2017.  Well, the commenter was a bit late for that - I usually have this whole thing planned out early in January.  But I was happy to invite her back for 2018, and I'm pleased to introduce you all to today's guest, the talented Kelly A. Evans.  Let's meet her briefly and then jump right into the interview.  (Incidentally, if you ever want to be on the blog for any reason, my contact info is here.)

About Kelly A. Evans:

Kelly Evans was born in Canada of Scottish extraction but moved to the UK after graduation where she worked in the financial sector. She returned after nearly 20 years away and now lives in Toronto with her husband and three rescue cats. Her horror stories have been published in numerous magazines and E-zines. She is also the author of The Northern Queen, an historic fiction taking place in Anglo Saxon England, and The Mortecarni, a medieval horror taking place during the Black Death.  Kelly is currently working on the second book in the Mortecarni series.

KAE:  I'm not only a huge fan, particularly of the old black and white classic horrors and the 50s/60s giant-animals genre, I'm a writer of horror. My short stories have been published in both e-zines and paper magazines, and my first horror novel came out last year.

KAE:  Water! I'm terrified of the stuff, won't get in a boat unless I can see the shore, can't even look at pictures of underwater ships etc. Man, don't get me started on those horrifying Titanic images! And all of the creepy sea creatures, like aliens. Is that a fear, or a healthy respect? Hmm...

KAE:  The horror market is absolutely dominated by men! Maybe because, in the early days of horror, thinking about, never mind writing about, dead bodies, beasties, creatures, death, etc etc, was NOT a very lady-like activity. Thankfully those days are gone but we're still very much playing catch up with the boys.

I'd have to say I enjoy reading about the history of Lady Bathory, as well as Delphine LaLaurie. In film, Sigourney Weaver, hands down.

I'm currently working on the second of my historic horror novels. But folks should absolutely check out the first, THE MORTECARNI. It takes place during the Black Death in England in 1348 (lots of research went into it to make it as historically accurate as possible!) There's a physician monk, some undead nuns, a 'witch', a mortecarni child, and, of course, lots plague! Fun for everyone! 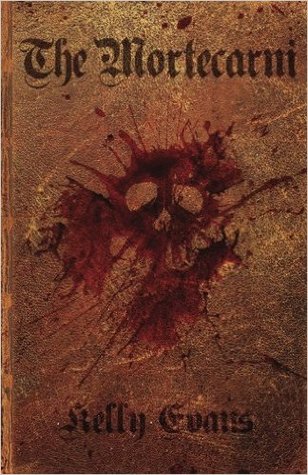 THE YEAR IS 1348 AND THE BLACK DEATH IS RAVAGING ENGLAND. For Brother Maurice, a monk and physician, the disease is the most terrifying he’s ever seen. But Maurice soon learns of an even more deadly threat: the exanimate Mortecarni. After his first unexpected encounter with the creatures, Maurice is pulled into a world of savagery and secrecy. As he travels across the country, investigating both the plague and the Mortecarni, Maurice questions how such unholy suffering is possible. When his own family is struck down, his beliefs falter. Can he regain his faith and save both England and himself?
Posted by Stephen Kozeniewski at 12:00 PM