Allow my to step on my soapbox (aka blog) about NaNo this year...

So, you've probably noticed I haven't been talking much about my NaNo novel this year.  I usually don't, if you've followed this blog, because I'm usually so burnt out by doing it that I don't even want to think about it.  This year I was burnt out by NaNo, yes, but much more so by lumping NaNo in on top of the Hundie Challenge, in on top of publishing two books, in on top of...

I always post my stats so you can get an idea of what my erratic behavior is like in the month of November.  So, here's that: 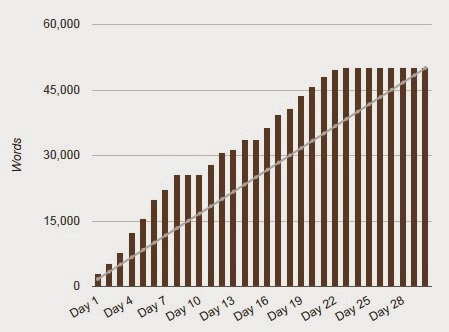 KINGDOM, of course, is far from complete, and if you've followed me here for some time you may remember the year I wrote ONCE UPON A TIME IN THE KINGDOM for Script Frenzy (RIP) and you'll know that it is an epic.  KINGDOM will be an epic if I ever finish it, and converting it to the steampunkesque milieu I have in mind may be an even more titanic feat, but, I think, will save it from being humdrum and banal.  (And I am nothing if not against being humdrum and banal.)

Anyway, there's another reason I kind of waited to talk about NaNo.  And that's because I've noticed, just this year, apparently, that people are kind of being dickish about it.  Let's be frank: I don't really need to do NaNo, I don't really get a whole lot out of it anymore, I've proven to the world (five times in a row now) that I can buckle down and churn out 50,000 words in a month.  Really the reason I do it anymore is to be part of the writing community and to maintain my street cred.  (Because, yes, if you're an author, everyone will ask you if you're doing NaNo this year.)

Which raises the point of community.  NaNo is supposed to be about cheering on people who aren't really writers or who are still just novices and encouraging them to finish their damn books.  But for some reason (and it may just be me, and I may just have a totally skewed perspective) I feel like this year it has all been about people trying to prove they can outdo each other.  Look at me.  I got to 50,000 and set it aside because I had other shit to do.  But I see half the writers in my social media going on and on about how they've hit a quarter of a million words and ha ha ha and the other half weeping and feeling excluded by the first half.

Let's be real here.  If you're writing these ridiculous amounts you're either cheating or you don't have a day job.  And good for you, I wish I didn't have a day job, either, and could write all day every day.  And if you're cheating, who the fuck are cheating for?  What are you trying to prove?  The people that NaNo is really geared towards are the harried, sad, unconfident people.  Let's try not to wreck up their confidence any worse, shall we?

Anyway, it may just be my burnout talking here or I may just be castigating people needlessly, but I did not enjoy the community this year, so I apologize for not being a good member of it.  But if I'm totally wrong feel free to call me an asshole in the comments.  Back to the Hundie Challenge tomorrow.
Posted by Stephen Kozeniewski at 6:14 PM

Email ThisBlogThis!Share to TwitterShare to FacebookShare to Pinterest
Labels: NaNoWriMo